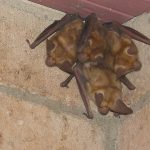 The professionals at Triangle Wildlife Removal will start by inspecting the area for signs of an infestation before the removal of nuisance bats. Some signs include chirping sounds, brown and black stains near re-entry points and bat droppings or guano near places like attic vents. After assessing the situation, our experts will decide how treat your specific situation. This may include bat removal and exclusion as well as teaching home and business owners how to prevent further incidents. Our wildlife technicians are highly skilled in safely removing bats from your home, cleaning up their mess and sealing entry points. With over 25 years of animal removal experience Triangle knows how to get them out and keep them out. Get Rid Of Bats In The Attic >> 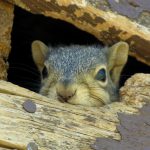 Squirrels will have anywhere from one to about eight young. The average is around four. The drays will open their eyes in about four to six weeks and be mobile by 8 weeks. There is nothing more precious than a baby squirrel.  They feed on acorns, grasses, leaves and hard mast. They are frequent visitors of bird feeders and are a favorite to the delight or dismay of one’s view. They are normally diurnal in which they are more active in early morning and late afternoons.  They are normally found in attics in which they enter through breaches in the roofline, gable vents, attic fans, ridge vents and water tables. They will also chew through the fascia, soffits and aluminum gutters, if persistent enough. Once inside the attic, they will gnaw rafters, joists, wiring and pipe insulation in order to keep the teeth worn down. Get Rid Of Squirrels In The Attic >> 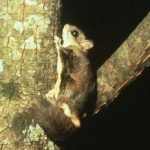 Flying squirrels (scientifically known as Pteromyini or Petauristini) are a tribe of 50 species of squirrels in the family Sciuridae. They are not capable of flight in the same way as birds or bats but are able to glide from one tree to another with the aid of a patagium, a furry, parachute-like membrane that stretches from wrist to ankle. Their long tail provides stability in flight. Anatomically they are very similar to other squirrels but have a number of adaptations to suit their life style; their limb bones are longer and their hand, foot bones and distal vertebrae are shorter. Flying squirrels are able to steer and exert control over their glide path with their limbs and tail.

Molecular studies have shown that flying squirrels are monophyletic and originated some 18–20 million years ago. Most are nocturnal and omnivorous, eating fruit, seeds, buds, flowers, insects, gastropods, spiders, fungi, bird’s eggs and tree sap. The young are born in a nest and are at first naked and helpless. They are cared for by their mother and by five weeks are able to practice gliding skills so that by ten weeks they are ready to leave the nest. Get Rid Of Flying Squirrels In The Attic >> 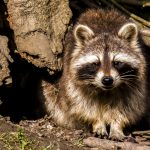 Raccoons are nocturnal animals that are highly intelligent.  They adapt quickly to their surrounding environment and can create multitudes of problems.  They are opportunistic feeders, and will feed on almost anything edible.  They typically have one litter a year in early spring of one to about six kits or cubs.  The young will open their eyes in about four to six weeks and are mobile at eight to ten weeks of age.  Young raccoons make chirping sounds that resemble birds.  The female raccoon will typically make a home in attics, chimneys and crawlspaces where the young are raised.

The female raccoon will enter the attic through fascia boards, gable vents, attic fans, prefab chimneys or rotten areas of wood along the gutter line. Once inside the attic, homeowners will face a variety of problems.  There will be noises the majority of the night, foul odors from urine and feces, damaged insulation, possible rabies exposure, fleas, and then roundworm, which can be deadly. Get Rid Of Raccoons In The Attic >> 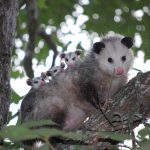 Opossums are omnivores and eat a wide variety of food. They will inhabit burrows, under decks, crawlspaces, outbuildings and attics.  They are more often found in crawl spaces and lower areas of buildings. They get a bad name because of their looks but in actuality, they are very docile creatures. Rarely do they carry rabies. They hiss and open their mouths in a defensive tactic when confronted but will quickly roll over and play “possum” if the intruder persists. When living under a house, they will create a mess. They will have a large latrine, in which the droppings and urine have a horrible smell. The ductwork and insulation tends to get destroyed and the vapor barriers will need to be replaced. They do not have a long lifespan in the wild and therefore many dead ones are removed also from buildings and crawl spaces.

Triangle Wildlife Removal & Pest Control, Inc can solve your possum issues. After a thorough inspection of the premises, we can remove the animal, seal any entrances and offer complete cleanup and disposal of damaged items. Get Rid Of Opossums >>

Snake removal should only be attempted by professionals who can recognize the type of snake and tell whether it’s venomous or not. The experts at Triangle Wildlife Removal & Pest Control Inc. use humane removal methods, such as live traps, whenever possible to relocate snakes to a more suitable habitat. Afterward, our technicians will work with you on snake exclusion, which means modifying your environment in ways that deter them. For instance, repairing cracked or broken basement windows and garage doors that don’t close securely will eliminate openings where one may enter your home. Keeping the grass cut and maintaining neat flower beds and gardens will cut down on available food. Eliminating outdoor woodpiles and rock displays will help keep them from nesting in your yard. Get Rid Of Snakes Around Your Home >> 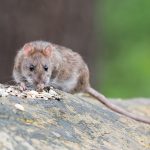 Rodent control is something that most homeowners don’t usually need to concern themselves with, but it’s important to respond when signs of an infestation become evident. In addition to their potential for carrying disease, rats and mice are known to cause damage in and around buildings. House and deer mice in particular can present a major challenge for residences, as they’re able to gain access through cracks no larger than a quarter-inch in size. When you’re in need of removing mice or having an effective prevention strategy in Raleigh, don’t hesitate to call on Triangle Wildlife Removal.

Much like mice, rats can present big problems once they have gained access to your home. They tend to propagate in large numbers when natural predators do not exist in an area, and the unchecked masses often look to indoor locations for nourishment. However, rats are also known to chew through just about anything they come across in their search for food. One in four broken electrical cables are estimated to be the work of these aggressive critters, occurrences which can result in building fires, highlighting the importance of rat control in every area. Get Rid Of Rodents >>