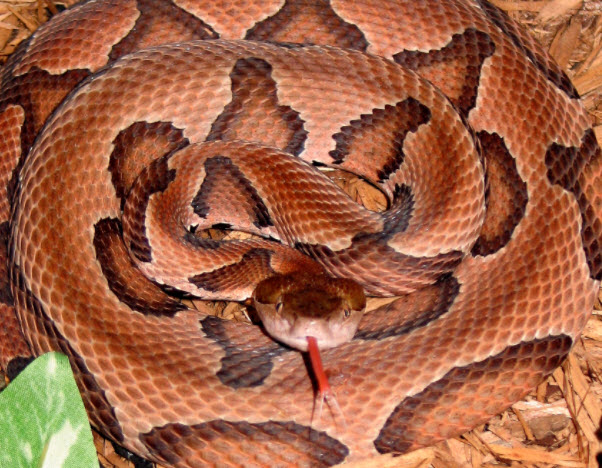 Call Now For Help With Snakes

The coastal plains and mountainous regions in North Carolina make it a perfect habitat for snakes. There are currently more than 37 species of snakes in the state, most of which are non-venomous. Here are some of the most common snakes of North Carolina.

These graceful, mile-tempered snakes are common in many forested areas around North Carolina. As the name suggests, they are green in color and can either be smooth or rough textured. Their color allows them to camouflage themselves in green grasses, trees, and backyards in residential areas. These snakes mainly feed on insects which include crickets, grasshoppers, caterpillars, and spiders.

Earth snakes have a dull appearance, usually a dark tone of brown. This enables them to be perfectly camouflaged in soil, mud and in the ground. These snakes are often spotted in forested areas under piles of tree leaves or decaying tree trunks. Their diet mainly consists of snails, worms, slugs and small frogs. This snake is more likely to flee than attack when cornered.

The bright colors of these snakes make them look dangerous and venomous, but in actual senses, they are quite harmless. Adult milk snakes grow to around 45 inches and have a small body size. These snakes mainly feed on mice, lizards and other snakes.

Racer snakes have a similar appearance to black rat snakes but have a smaller diameter and have a small white patch under the chin and along the throat as opposed to a white belly. They mainly live in brushy areas, meadows, and hillsides. In human populated areas, they can be found in tins or underneath floorboard in old buildings. Their diet mainly consists of insects, mice, eggs, lizards, and frogs. An adult racer snake could grow to around 70 inches in length. Racer snakes are not aggressive in nature and will quickly slither away if not provoked.

These snakes have a slated-grey or black slender body. Their neck ring and belly colors vary from a creamy yellow to a reddish orange. They are mostly found under flat rocks, loose barks of dead trees and old logs. They mainly feed on lizards, salamanders, worms, slugs and newborn snakes. Similar to the garter snake, ringneck snakes will release a foul-smelling musk when captured or provoked

Corn snakes come in a wide variety of colors. These colors may include grey, orange, red or brown-black. The colors are often accompanied by reddish brown patches that may be bordered with black. These snakes are often misidentified as copperheads but they are neither aggressive or venomous. They mainly feed on rats, birds, mice, lizards, and frogs. For those who are adventurous and would like to keep a snake as a pet, this is a good choice.

Garter snakes have a wide variety of patterns and colors. These colors may include green, red, brown or blue with dark brown or black stripes. In the wild, they can be found in mountainous regions with moist vegetation. They mainly feed on small fish, frogs, worms, salamanders, and toads. As a defense mechanism, these snakes become quite aggressive when captured and release a nontoxic musky foul smell.

This snake has a long slender body that allows it to move extremely quickly. The snake is mainly found in sandy flat woods, grassy dunes, sandhills with pines, wiregrass and oaks, and maritime forests. The coachwhip’s diet mainly consists of mice, birds, eggs, lizards and other snakes. This snake is not known to be aggressive, but when cornered, it will bite its attacker repeatedly.

Interestingly, these snakes are often misidentified as copperheads, to which bear a slight resemblance. Rat snakes vary in color but the most common adult colors in North Carolina are black with a spotted-grey and greenish-yellow with four black or brown stripes on the length of the body. As the name suggests, rat snakes mainly feed on mice, rats, birds and other small reptiles. They are quite useful in keeping the number of dangerous snakes and rodents in check. In populated areas, the rat snakes can be found in garages, old buildings, and sheds.

This large docile snake is rare but can be occasionally be spotted in residential areas hunting for prey. It mainly feeds on lizards, eggs, mice and other snakes which include the venomous copperhead. All the snakes that have been mentioned are non-venomous and will not strike when you don’t bother them.

There are more than 37 species of snakes spread in the North Carolina territory. This is state where these animals can dwell and grow in number. Yet, only 6 out of the full amount of these reptiles are considered dangerous for the human beings. But, it’s not easy to identify which species are venomous and which aren’t as they all share similarities with one another. If you are willing to give a glance at some snake pictures, feel free to visit Common Snakes of North Carolina. You will view photos and find information regarding the only 6 snake species that can hurt humans.

This kind of snake is often found in wetlands and in some other areas such as swamplands. Although it does contain powerful venom in its fangs, it’s still not seen as a deadly snake, in fact, it’s not as fatal as people think. Despite this, experts believe that copperhead snakes can kill dogs, cats and other pets with ease, so beware in case you own them. It is a fact that its venom is not fatal for humans, but it can still cause effects like dizziness, vomiting and headaches. Many often confuse them with some aquatic snakes.

Well, this animal is easy to recognize because when it opens its mouth, you can see that its insides are white. Cottonmouth is also called water moccasin and has the habit of opening the mouth wide very much when it attacks. Thus, scientists called it that. This species is truthfully dangerous to humans. Its venom has the peculiarity to destroy blood cells very rapidly. Once it bites, the cottonmouth injects hemotoxic venom that goes directly to the structure of the blood. When the liquid starts travelling in the bloodstream, tissue damage sets in. People bitten by this reptile usually suffer internal bleeding which eventually leads to death if untreated. As explained before, the cottonmouth is often confused with other snakes that live in the area but this one has certain variations on its skin. If you happen to see a snake with diamond-shaped marks on the back, keep off of it. When this animal feels threatened, it goes at you with its typical wide inner lining.

This species has so many names that can befuddle you. Some people call it pygmy, others pink rattlesnake, but they obviously refer to the same species. It doesn’t grow too much; it indeed grows as much as just some inches. It can be a short thing, probably cute and nice-looking, but its bite is fatal. It is considered one of the most venomous snakes of North Carolina. Children are among its favorite targets, so keep an eye on your kinds when going camping or hiking. Its venom also destroys the tissues and causes internal hemorrhage.

Luckily, coral snakes are a rare find in North Carolina. It is more common in southern areas of the United States. They are arguably not aggressive like other snakes, which means they prefer to hide or slither away. This is good because coral their venom is deemed as one of the potent ones in the world. The good news is that their fangs are not so big and cannot penetrate the human skin so easily. When they open their mouths, they usually display 3-centimeter long fangs that inject potent venom. Compared to other snake species of North Carolina, the coral snake has very small fangs. This natural “disadvantage” is actually not a disadvantage when you are one of the most venomous snakes of North Carolina.

The size of this species varies depending, probably, on certain factors. The point is that it’s uncommon to see very long diamondback rattlesnake, but you can be left speechless if you encounter an 8 – feet eastern rattlesnake lurker in your kitchen. It is not the deadliest serpent but its venom is powerful enough to cause death. You will rarely see it in wetlands because it has preference for thick vegetation. They usually live in fields. Only a few of them can be found in pine flatbeds.